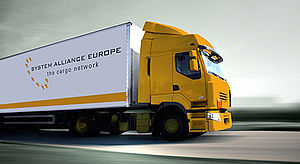 The European groupage cooperation had set itself the goal to transport at least 3.9 million consignments in 2015. This goal was achieved – in total, 3,913,110 consignments were transported last year, representing nearly five percent increase over the previous year. The tonnage was 1.628 million tons.

"We strive every year for more volumes – it is great that our goal for 2015 has been achieved. Also in 2016, we aim to further increase consignment numbers. According to the strategy paper, 4.1 million consignments shall be transported. We are sure that we will reach this goal, since the collaboration quota among partners grows organically," says Uwe Meyer, managing director of System Alliance Europe.

Since January 2016, FREJA is official partner of the cargo network with the three subsidiaries Denmark, Norway and Sweden. The Scandinavians reinforce the network with a total of 10 branches. Thus, the network comes to a total of 1,803 regular traffic lines in January. Since January 2016, Sifte Berti is not a partner of the System Alliance Europe anymore.

Currently, the cooperation consists of 61 partners in 32 European countries with 201 branches.